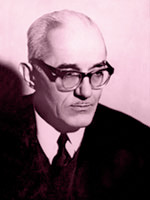 A distinguished clinician, radiologist, Yuri Nikolayevich Sokolov, was born in Moscow in 1905. Yuri Nikolayevich’s father was a lawyer, his mother was one of the first X-ray laboratory technicians in Moscow. After graduating from the 1st Moscow Medical Institute in 1930, he worked as a doctor for 2 years and in 1933 entered the graduate school of the Moscow Institute of Roentgenology and Radiology.

In 1936, Yu.N. Sokolov defended his Candidate’s dissertation in which he studied effects of X-rays on the Arthus phenomenon and allergic reactions. In the same years, Yu.N. Sokolov begins his teaching career, working part-time as an assistant in the Department of Radiology, Institute for Advanced Medical Education.

In June 1941 he was called up for military service. On the Bryansk and Voronezh fronts, he headed the X-ray department as part of hospitals, and in 1943 he was appointed as chief radiologist of the 1st Ukrainian Front. While in the army, he did not stop research activities, publishing articles, making reports and participating in the compilation of research papers of battlefield radiologists. He organized courses on the specialization of battlefield radiologists. Yu.N. Sokolov headed the editorial board of the collection of research papers of the Voronezh Front.

After the demobilization, Yu.N. Sokolov returns to Moscow Scientific Research Institute of Roentgenology and Radiology (MSRIRR), where he works as a senior scientist, and then as deputy director for science of the institute. During this period, Yuri Nikolaevich conducts research in the field of X-ray diagnosis of diseases in gastroenterology. In these years, together with A.I. Ruderman he published the monograph “Radiodiagnosis of gastrointestinal cancer”. The second direction in the scientific activity of Professor Yu.N. Sokolov became X-ray pulmonology. A number of articles have been dedicated to research on the study of chronic emphysema and pulmonary failure. In the course of work, the phenomenon of pulmonary transparency on inhalation and exhalation was revealed and confirmed. “Sokolov’s test” has not lost its relevance in our days.

He defended his doctoral dissertation on this topic in 1951.

Since 1977, at his personal request, he was offered the position of consultant, which he held until his death in 1984.

The author of more than 150 printed research articles, Yuri Nikolaevich Sokolov left a noticeable mark in X-ray science. The terminology in roentgenology and radiology, methods for the objective recording of pulmonary emphysema, issues of lung fluorography, breathing techniques, diagnosis of bronchopneumonia – all these questions were deeply studied at the department. Priority scientific research at the department, of course, was the study of diseases of the gastrointestinal tract.

Between the monographic works of Yu.N. Sokolov should be noted “X-ray diagnostics of gastric cancer”, 1947 (with A.I. Ruderman), monograph “Relief of the gastric mucosa in norm and pathology”, 1968 (together with P.V. Vlasov), manual “X-ray diagnostics of digestive tract tumors” (together with V.B. Antonovich). All these works have not lost their practical and scientific significance at the present time. Under the leadership of Yu.N. Sokolov, 7 doctoral and 40 candidates dissertations were prepared and defended.

In addition to the scientific activity, Yu.N. Sokolov was an active participant in public life, the organizer of educational activities for doctors. In the second half of the 50s and in the 60s, inter-department clinical and radiological conferences were popular in Moscow radiology. They were organized by S.A. Reinberg, but Professor Yu.N. Sokolov and employees of his department took part the most active participation. At these conferences, not only rare and difficult cases of X-ray diagnostics were examined, but also young specialists were trained in typical clinical situations. Among the leading radiologists, serious discussions often arose. At the same time, the emphasis of the analysis was on clinical, methodological aspects and, to a lesser extent, on scientific ones. For radiologists, this was a real school of clinical and radiological thinking, which prevails among diagnostic radiologists today. In a slightly different form – lecturing for all clinical residents of the first year – these, common to all departments of the conference, have been resumed at the initiative of Professor A.Yu. Vasiliev, RAS Corresponding Member.

In different years, Yuri Nikolaevich was the chief radiologist of the Ministry of Health of the USSR and the IV Main Directorate under the USSR Ministry of Health. Yu.N. Sokolov was a wonderful teacher and had excellent speaker skills. His lectures were distinguished by clear methodological skill, elegance, and exquisite speech. Yuri Nikolaevich was a typical representative of the old Moscow intelligentsia. He spoke good Russian, his manner personal style and appearance attracted attention.

Yuri Nikolaevich found the beginning of big changes in the new era of radiation diagnostics. The use of computed tomography for the study of the brain made a great impression on him. According to Sh.Sh. Shatemor (student of Professor Sokolov), Yuri Nikolayevich was struck by the possibility of differentiating the gray and white matter of the brain. “This is fantastic,” exclaimed Yu.N. Sokolov.” At the present stage of the development of radiation diagnostics, the creation and evolution of multispiral computed tomography, high-field magnetic resonance imaging, modern ultrasound and positron emission diagnostics make it possible to approach the diagnosis of pathological conditions at the cellular level.
But, undoubtedly, past generations clinical radiologists greatly contributed to the development of classical X-ray diagnostics, which in many respects has not lost their relevance. Yuri Nikolaevich Sokolov also belongs to the constellation of their most prominent representatives.